In November we installed solar for Walter and his electricity bill has since reduced by over 95%. Here is what Walter had to say initially following our installation:

“Thank you Phil and the team for the fantastic job from quote to cleanup. We have just received our first electric bill and saving big $ already. I really appreciated the time patience for the way you explained the answers to my many many questions. Your price for the system was less or the same as others and another reason we chose you and your company was after speaking with your other customers who also gave you great praise.

The install went smoothly,  neat cabling and cleaned up after.  Also they even replaced some broken tiles I’ve been wanting done. Their advice to locate the inverter was great and a place I hadn’t considered was possible.“

Last month Walter got in touch to let us know about the massive savings he has made on his power bill since installing solar and that he will be able to recover the cost of the system in two years with these savings.

“The reason I chose Phil and the team at Formula Sun is they have been installing solar systems for over 15 years and not the big company that went broke while the ink was drying on their quote. Phil and the team advised and installed our Solar system with budget equipment system as we requested which included a the same 10 / 25 year warranty periods as the high end systems on our difficult roof for the same or less than other quotes. Since installed our electricity bill had come down from around $600 to just $20 with the recommended few changes to our usage habits. We will be able to recover the cost of system in 2 years as of our last bill.” 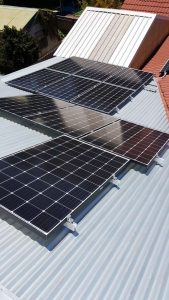 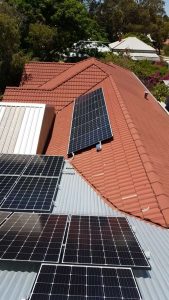